Did you know that watermelon is 92% water? No wonder it’s so refreshing! People have been digging into this tasty, juicy fruit for millennia and it all started in Ancient Egypt. It’s said that watermelon cultivation began in the Nile Valley as early as the second millennium B.C. Watermelon seeds were even found in King Tut’s tomb! On August 3, we celebrate this ancient berry in a feast of juicy deliciousness—otherwise known as National Watermelon Day.

When is National Watermelon Day 2022?

There’s nothing like beating the heat with summertime’s most refreshing fruit, celebrated on National Watermelon Day on August 3.

The juicy, refreshing watermelon deserves its own day, that’s why we celebrate National Watermelon Day. Cultivation of this fruit dates back to 2000 B.C., with the first watermelon harvest on record occurring approximately 5,000 years ago in Egypt. Traces of watermelon and its seeds have been discovered on sites of the 12th Egyptian Dynasty, including in the tomb of King Tutankhamen. Paintings of different types of watermelon have also been found in ancient Egyptian inscriptions.

The sweet fruit we enjoy today is the result of mutations over the course of a thousand years of cultivation. Watermelon seeds were sold to traders passing through the trade routes in the Kalahari Desert in Africa. From there, the cultivation of the watermelon spread across Africa. The origin of the progenitor of the watermelon was in Africa, after which it spread into Mediterranean countries and other parts of Europe. By the end of the ninth century, watermelon cultivation became common in China and the rest of Asia.

According to “The Dictionary of American Food and Drink” by John Mariani, the word ‘watermelon’ first appeared in the English dictionary in 1615. The watermelon is commonly known as a type of melon, but it is not in the genus Cucumis. The outer rind of a watermelon is dark green with yellow stripes or spots. Over 300 varieties of watermelon are available in the U.S., ranging from red to white, and come in different shapes and sizes.

The watermelon has long inspired artists, such as Giuseppe Recco's “Still-Life with Fruit and Flowers.”

In his novel “The Tragedy of Pudd’nhead Wilson,” Mark Twain describes the watermelon as “what the angels eat.”

What’s Better than a Watermelon?

Seedless watermelons are developed by treating the un-pollinated flowers of watermelons with an acid.

The Guinness World Record for the heaviest watermelon ever is grown by Tennessee-based Chris Kent.

Watermelons are enjoyed in all shapes, sizes, and colors on National Watermelon Day. Delightfully sweet and tasty, they are the go-to fruit for summer. No picnic is complete without watermelons. Best enjoyed outdoors, watermelon-eating contests and seed-spitting contests are a tradition. As they consist of 90% water, smoothies, sherbets, cocktails, and other beverages are concocted from watermelons, today, and desserts featuring watermelon as the main ingredient are also prepared.

Learning how to pick a ripe watermelon is an art and a tradition. Many people utilize National Watermelon Day as an opportunity to educate themselves or others on how to tell whether a watermelon is ripe.

National Watermelon Day By The Numbers

What is the best month to buy watermelons?

Typically, the best time to buy watermelons is between the months of May and September.

Is watermelon available all year?

What percentage of watermelon is water?

Why We Love National Watermelon Day 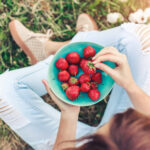