Flossing Day is celebrated on the fourth Friday in November (i.e., the Friday after Thanksgiving), which is November 25 this year. The holiday stresses the importance of flossing your teeth every day for excellent oral health. Can you believe that horsehair was used as dental floss before the invention of the modern floss we use today?

Before the beginning of written history, humans have used a wide variety of materials like dental floss. Based on anthropological evidence found in ancient humans, horsehair was used as one of the first types of dental floss. Toothpicks and chew sticks with sharpened points are also two of the tools early humans employed for interdental cleaning.

In 1815, Dr. Levi Spear Parmly, a New Orleans dentist, created the earliest iteration of the modern dental floss. It was a thin, waxen silk thread that he encouraged his patients to clean between their teeth. This thread was readily available everywhere because it was used in tailoring. Four years later, Dr. Parmly published his dental book, “A Practical Guide to the Management of Teeth.” In the book, he recommended brushing twice a day and flossing once every day.

However, in the 1940s, silk became expensive because of the war, causing the price of silk dental floss to skyrocket. Dr. Charles Bass introduced the idea of replacing silk with nylon. The idea received traction and later led to the invention of dental tape.

Dental floss has since evolved and now comes in different textures, materials, and flavors. They are also made to fit different mouths’ shapes and sizes. In 2000, the National Flossing Council created Flossing Day to remind everyone of the importance of flossing.

Early humans, according to anthropology, use horsehair as one of the tools for flossing.

The Book of Flossing

Dr. Levi Spear Parmly publishes his dental book, where he advises brushing twice and flossing once per day.

Because of World War II, silk becomes expensive, causing the price of dental floss to skyrocket.

The National Flossing Council launches Flossing Day to raise awareness on flossing once every day.

When should I floss, before or after brushing?

The best practice recommends that you floss before you brush your teeth.

What happens when you floss every day?

Flossing every day helps remove food particles and prevent plaque buildup between your teeth and areas where your brush cannot reach. Overall, flossing every day can help improve your oral hygiene.

Is missing one day of flossing bad?

No, as long as you don’t miss frequently. Always aim to floss once a day — in the morning, during the day, between meals, or at night.

How to Observe Flossing Day

5 Interesting Facts You Don’t Know About Your Teeth

Why Flossing Day is Important 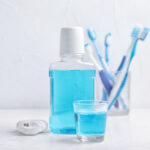