Born on this day in 1897, Amelia Earhart is one of America’s most beloved pioneers in aviation and, today, on National Amelia Earhart Day, July 24, we celebrate her life and achievements. While many remember her for her mysterious disappearance in her internationally anticipated flight around the world, she had a life filled with achievements and trailblazing. Read on to learn about the many contributions she made to the world of aviation.

National Amelia Earhart Day celebrates the inspiring life of famous American pilot, Amelia Earhart. July 24 was chosen in honor of her birthday but no other details of how the holiday came about are known.

Amelia Earhart’s love of flying began in December 1920, with her first flight in California with World War II pilot, Frank Hawks. Soon after this life-changing experience, in January 1921, Earhart started flight lessons under female pilot Neta Snook. Later that year, she bought her first plane, a yellow Kinner Airster, which she named ‘The Canary.’

She received her National Aeronautics Association license in December 1921, just one year after her own first flight and, from there, the sky was her limit! Throughout her life, she achieved many records, the first one in 1922 when she became the first female pilot to fly solo at 14,000 feet.

In 1929, Earhart helped form The Ninety-Nines, an international nonprofit organization whose mission was to advance women in aviation. Launched by 99 women pilots at the time, The Ninety-Nines continues to inspire the new generation of women pilots through education, scholarships, mentoring, and general support linked by a passion for flight.

Earhart’s fateful flight around the world began on June 1, 1937, out of Oakland, California. She and navigator Fred Noonan left New Guinea on July 2 with 7,000 miles remaining of their journey. However, this would be the last day they’d be seen alive. Their disappearance remains a mystery to this day, although numerous theories have been proposed.

Amelia sees her first airplane at a state fair when she is 10 years old.

Amelia flies for the first time with pilot Frank Hawks.

Amelia is elected to serve as the first president of The Ninety-Nines.

Amelia designs flight clothes that are advertised in “Vogue.”

Who was the first female commercial airline pilot?

How many female pilots are there today?

Who was the first female pilot in the Air Force?

Jeannie Leavitt was the first woman to serve as a fighter pilot for the U.S. Air Force in 1993. 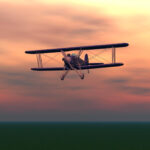 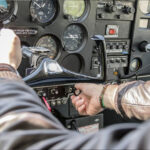