When the sun hardly sets and the nights are no longer dark (have you witnessed the Midnight Sun in real life?), it’s time to celebrate Midsummer’s Day in Finland, which occurs every last weekend of June — this year, on June 24. Midsummer’s Eve marks the official start of the warm summer weather, annually celebrated as a major national holiday and characterized by a playful sun casting golden hues over the country. Sporting a rich and colorful history, Finland is among the few places to witness this incredible astronomical event because it lies north of the Arctic Circle. So, get ready to set up a campfire and bring along outdoor speakers, marshmallows, and a group of friends for 24-hours of dancing festivities in the open air.

Besides Finland being the happiest country, it’s reportedly one of the most magical and historical places on Earth as well. Traditionally, Midsummer was a pagan summer festival of harvest and fertility. Initially, the day would be spent hosting parties, paying tribute to and honoring the Finnish god of thunder, Ukko, so that he would be happy and assure a good harvest. Ukko controlled the fall of rain and so they were obliged to please him.

After Christianity arrived in Finland, the Midsummer festival of the pagans became discreetly associated with Christian celebrations. Also called Juhannus, Midsummer’s Day is now celebrated in the memory of John the Baptist whose birthday is also celebrated during this time.

Midsummer’s Day is known for countless key traditions including Nightless Night, characterized by a belief in witches, fairies, and elves who descend on Earth (that’s why the night is lit!) to tease humans and predict their futures. Driven by this tradition, young people buy bouquets of seven or nine different flowers, place them under their pillow, and hope to dream about their future spouse. The Midsummer weekend is also popular for weddings, in the name of fertility.

Another tradition is hosting ‘kokko’ – a huge bonfire that’s placed near water, casting a stunning reflection on the crystal-clear lakes together with the hues of the Midnight Sun. Since the times of pagans, Midsummer Day in Finland is a lively and cheerful celebration that locals keenly await.

In honor of the birth of St. John the Baptist, the feast day is established by the undivided Christian Church.

Across various countries, St. John’s Eve is celebrated as “a custom to carry lighted torches on Midsummer-eve, as an emblem of St. John the Baptist, who was 'a burning and shining light' and the preparer of the way of Christ,” according to “The Olio, Or, Museum of Entertainment, Volume 7."

Traditionally celebrated on a fixed day on June 24, the holiday is moved to Friday and Saturday between June 19 and June 26.

When is Midsummer in Finland?

Contrary to other countries, Midsummer is not celebrated on a fixed date in Finland. It’s on Friday and Saturday between June 19 and June 26, or the last week of June.

What is Midsummer Day?

It is a major national holiday, marking the start of summer, and is spent celebrating, dancing, drinking, and partying in the open air and at night.

How many countries celebrate Midsummer Day around the world?

Many countries celebrate the holiday, including Sweden, Canada, Norway, and Finland.

5 Facts About Finland That You Didn’t Know

Why We Love Midsummer Day 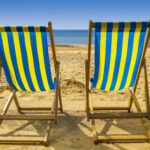 Chant at the Moon Day