It’s a ‘beary’ good day to celebrate National Black Bear Day on June 3 this year, which has been observed each year on the first Saturday in June for the sole pur-‘paws’ of teaching people about black bears and dispelling the myths surrounding them. This was the last pun, we promise. Just bear with us.

Bears inhabited practically every continent when humans first made their way to North America. The grizzlies actually thrived in all western states, from Mexico to the tip of Alaska. The smaller black bear, a relative to the grizzly, was living in places as far-ranging as the Atlantic and the Pacific in North America, and Mexico to the northern edge of the continent. Since the black bear was a valuable source of thick hides for clothing and shelter, rich meat, and sweet fat for the Native Americans, we can see why they valued it and passed on the stories of these bears through their oral folktales.

The European settlers brought with them their fear of the wild and the animals that lived in it. These bears posed a threat to life, livestock, and crops and so they began killing them. Their fear made its way into popular children’s books at the time, which showed bears attacking hunters alongside other predators preying on their cattle. As is common with a human presence, forest land was wiped out to make space for open farmland, and the bears began losing their homes. The more the population expanded, the more black bears were killed for safety, food, or other purposes. Because they reproduced much slower than other mammals, the black bear population began to dwindle.

However, restoration programs and recovery of forest land saw their numbers go up again, with some states like New Jersey and Maryland reporting a five-fold increase. While these bears have not been able to reclaim their entire territory across North America, there is still a good number of black bears in the wild. In fact, they are listed as the least endangered species by the International Union for Conservation of Nature due to their large population. While the bear population is expanding, so is the human population, to the extent that the two are coexisting in many areas.

The North Carolina Black Bear Festival founded National Black Bear Day to celebrate America’s black bear while trying to raise awareness about this animal and dispel all the myths and fear surrounding it.

Humans enter North America for the first time — bears are all over the continent at this time.

While Norse colonies had already been established in North America, systematic European colonization begins in this year.

The number of black bears in the wild is reduced to the point of extinction due to an explosion of human populations and habitat loss across America.

The black bear population increases 2% a year all over the continent due to reforestation, black bear reintroduction programs, and regulations on hunting black bears.

A mail survey done in New York State reveals a majority of residents enjoy having black bears in their state.

Our Day is Here

National Black Bear Day is officially ordained as a celebration to be observed annually.

How many black bears were left in the world by 2020?

Around 800,000 black bears roam the American continent and are gradually returning to their old territory.

Which national park has the most black bears?

The Great Smoky Mountains National Park in the southeastern part of the U.S. has the highest densities of black bears. Their population numbers approximately 1,500 black bears.

Which state has the most black bears?

Black bears are largely found in Alaskan forests, more than in any other U.S. state, which have an estimated population of 100,000 black bears or even more. 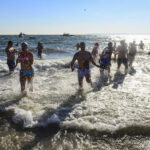