Day of the Dead, or Día de los Muertos, is a traditional Mexican holiday celebrated November 2. On this day, it is believed that the souls of the dead return to visit their living family members. Many people celebrate this day by visiting the graves of deceased loved ones and setting up altars with their favorite foods, drink, and photos.

History of Day of the Dead

The ancient indigenous people of Mexico have practiced rituals celebrating the lives of past ancestors for around 3,000 years. The celebration that is now known as Day of the Dead originally landed on the ninth month of the Aztec calendar and was observed for the entire month. In the 20th century, the month long festivities were condensed to 3 days called The Days of the Dead: Halloween on October 31, Day of the Innocents on November 1, and Day of the Dead on November 2.

La Catrina is one of the most recognizable figures of Day of the Dead, a towering female skeleton with vibrant make up and a flamboyant feathery hat. The Lady of Death worshipped by the Aztecs protected their departed loved ones, guiding them through their final stages of the life and death cycles. La Catrina that we know today came to be in the early 1900s by controversial and political cartoonist José Guadalupe Posada. Artist and husband of Frida Kahlo, Diego Rivera, included José’s La Catrina in one of his murals which depicted 400 years of Mexican history. His mural, “Dreams of a Sunday Afternoon in Alameda Park”, includes himself and a young child holding hands with La Catrina, who is dressed in sophisticated garb and a fancy feathered hat.

Plans for Day of the Dead are made throughout the year. Toys are offered to dead children and bottles of alcohol or jars of alote get offered to dead adults. Most families decorate their loved ones’ graves with ofrendas, which often includes marigolds. It’s said that these specific flowers attract the souls of the dead to the offerings, and the bright petals and strong scent guides the souls from the cemetery to their family’s home.

Day of the Dead timeline

Halloween in Mexico - Día de las Brujas, is the beginning of the Days of the Dead festivities.

The Day of the Little Angels, is specifically dedicated to people who died as children.

The Day of the Dead is the final and most popular day of the three day long celebration.

Day of the Dead Around the World

The main tradition for Day of the Dead sees families gather to honor and remember their loved ones who are no longer with us. Celebrated as a sacred and joyous occasion, there is plenty of food, lots of flowers, visits with family members and nostalgic stories about those who have died.

Day of the Dead FAQs

What happens on the Day of the Dead?

As per Mexican tradition, Day of the Dead is celebrated by offering goods to past loved ones and celebrating their lives.

Do you say Happy Day of the Dead?

What is an ofrenda for Día de los Muertos?

An ofrenda is a collection of offerings and decorative objects place on a ritual display during Day of the Dead celebrations.

How to Observe Day of the Dead

Why Day of the Dead is Important

Day of the Dead dates

Day of the Dead related holidays 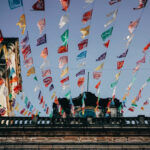