On National Solitaire Day on May 22, let’s acknowledge the brilliance behind the game of solitaire and how it helped entertain us for years. There is so much history behind the game and numerous fun facts! Here’s all you need to know.

Remember the hours spent playing solitaire after it was launched on Microsoft Windows in 1990? Well, you aren’t alone in your obsession with this card game, since there are over 242 million people from over 200 countries who are equally addicted to it. However, solitaire wasn’t solely created as a fun game by Microsoft. It was created to teach people how to use the mouse attached to computers and train them to become accustomed to the device. Today, solitaire is one of the most beloved and viral PC games known to mankind and, seeing how it is played by millions of people across the globe, it seems like the trend of solitaire is going to continue for years to come.

Due to the popularity of the game, Microsoft declared May 22 as National Solitaire Day in 2018. The purpose of the day is to recognize the card game that has reigned supreme for over 30 years by hosting large-scale celebrations. The National Solitaire Day event itself has gained a lot of traction in the past few years and even broke records of the most games of solitaire ever played in one day in 2020. Other official commemorations of the event by Microsoft include special surprises for the players, a double XP bonus in the game on Windows and mobiles, and video testimonials recorded for the purpose of honoring fans. Solitaire was also honored in the Video Game Hall of Fame in 2019.

The board game Peg Solitaire is all the rage.

It's in the Cards

The solitaire card game is introduced in Europe.

An intern develops the solitaire software for Microsoft.

Can I play solitaire on Xbox?

Solitaire is mostly installed on Windows PCs but is now available on Xbox One.

Is every game of solitaire winnable?

Around 80% of solitaire games are winnable based on your skills.

Why We Love National Solitaire Day 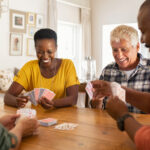